From 2008 through 2011 a recession struck the construction industry and while other companies were closing their doors Cavaliere saw opportunity to grow. As the private sector work was nearly non-existant we started to see more and more calls for the need on onsite recycling of asphalt and concrete into a useable product. This work expanded our crews to as far north as Maine, into Vermont during Hurricane Irene clean-up and into NYC at Ground Zero where a 3 year project ensued. The "Never Say No" and "Yes We Can Do That" mindset kept the company working with some unique projects. ​​The business persaveered and forged through the tough times and is now growing yet again. From 2012 to today we have updated our recycling unit, increased our truck fleet, a new Wirtgen half lane miller was added, along with a wheeled Doosan excavator, portable concrete plant with 3cy short load mixer and a mobile hot mix asphalt plant.

During the 1960s, C & P Excavating Contractors was the primary contractor for Southern New England Telephone Company, Northeast Utilities-now known as Eversource (gas and electric divisions), and the Stamford Water Company. The partners also worked for major building contractors on such projects as Caldors on Summer Street in Stamford (now the Burlington Coat Factory), the Army Corps of Engineers Stamford (CT) Hurricane Barrier, Harbor Power Station on Manresa Island in Norwalk and New Canaan HS. Throughout the 1960s, the company diversified by purchasing real estate in Stamford and the partners took on distinctive roles. Dominick Cavaliere managed estimations, sales, and customer service. Tony served as field coordinator and Frank handled all real estate for the company, including property purchases, planning, construction and the leasing and selling of these parcels developed by C&P Excavating Contractors. 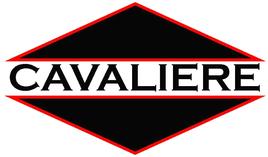 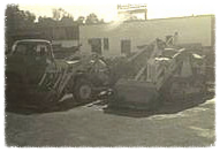 By the 1970s, under the direction of the three partners, C & P Excavating Contractors had grown into a well-respected company with a history of over 25 years of excellent service. The three partners had two sons each, and during those years, the six young men worked for their fathers’ business in the summers, and eventually joined the firm full time.

a new state-of-the-art office and repair facility. The new building boasts 1,500 square feet of office space and a three-bay repair garage with indoor wash bay. The parts and storage area is 5,000 square feet, housing spare parts and smaller tools and equipment. For the 2006 construction season, Cavaliere Industries added more heavy equipment as their customer base and services expanded. They added an asphalt paver, 2 more excavators and support equipment including mobile crushing and screening equipment in 2008.​

In 1955, Frank Cavaliere started a small excavating business with a new Oliver tractor equipped with a Pippin backhoe and a front loader bucket. Shortly thereafter, he invited Tony Portanova to join the business, and together they formed C & P Excavating Contractors, Inc. A new contracting business was born. Dominick Cavaliere, Frank’s younger brother, purchased a third share of the excavating business in 1957 while working part time after school. Upon his graduation 1959, he joined the firm full time. In those early years, C & P Excavating Contractors specialized in digging additions, foundations, and sewer and water lines. As business increased, more equipment was purchased, including a John Deere backhoe, a dump truck, and pick-up truck 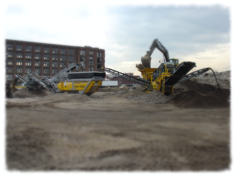 In 1988, Frank, Sr. and Dominick, Sr. purchased Tony Portanova’s share of the company. In 1989, a North East Utilities Electric Co. job was awarded to C & P Excavating Contractors, which included replacement of 46 buried splice boxes with 46 new precast concrete manholes in Greenwich, CT. That same year, North East Utilities Electric Co. once again turned to C & P Excavating Contractors; this next job entailed installing a transmission line in Darien, CT, and included a 12-conduit duct bank encased in concrete with manholes. The contract also called for milling and paving for the final road restoration. At the close of 1989, C & P Excavating Contractors seized another opportunity for expansion and purchased a Wirtgen milling machine.

In 1994, a used half-lane milling machine was purchased after C & P Excavating Contractors was awarded the annual contract for the Town of Greenwich to mill their roads. The work included trucking of milled material, trimming of manholes and curb boxes, sweeping, and traffic control in the work area. After a successful introduction to this larger scale milling work, a new half-lane Wirtgen Milling machine was purchased. Upon Frank Sr.’s retirement from the business in 1991, Dominick, Sr. purchased his brother’s share and became sole owner of C & P Excavating Contractors, with his sons, Louis and Dominick, Jr. (DJ), and daughter, Maria, working by his side. Over the next several years, C & P Excavation Contractor’s milling work included the milling of I-95 in Stamford, Darien, Norwalk, Westport, Bridgeport, New Haven, and Branford, CT.